It's Friday...Friday...time for a new low carb recipe!

Hello hello!  So I've decided to turn Fridays into Low Carb recipe post days.  Every Friday I will post a low carb recipe either I concocted or someone else did and tell you how delicious or un-delicious it turned out!  Hopefully I will be posting a lot more delicious rather than un-delicious ones!

Today's post is all about PIZZA!  Boy do I LOVE me some pizza!  Trying to eat low carb can be quite difficult at times, and almost unbearable when you are watching TV and a Papa John's or Pizza Hut commercial comes on!  Torture!  I found this recipe through Pinterest and knew I had to try it the next day! I ended up making this for dinner on Wednesday night and boy was I glad I did.  Not only did the boyfriend love it, I loved it too!

The only carbs really came from the pizza sauce, which wasn't even that many.  The crust was made out of cream cheese, eggs, and a little parmesan cheese.  It actually rose up a little and had a softer consistency.  Not quite the pizza crust consistency but it definitely passed and tasted like pizza to me!  I think after factoring everything in and doing a recipe calculator on Sparkpeople, it came out to 8.1 net carbs per serving.  I didn't think that was that bad at all!  Here is how mine turned out, however I got the recipe from Kim at Accidental Mommies.  I want to make sure I give her yummy credit where yummy credit is due!  If you click that link you can find the recipe for this dish so what are you waiting for?  Head on over!  The picture alone should be enough to entice you. 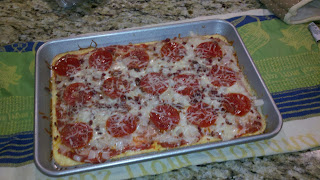 On her recipe she just used pepperoni.  I added onion and bacon to make mine a little more hearty, but once you bake the "crust," you could pretty much add whatever you want to it to make it your own.  Let me know if you end up making this and what combinations you used and what you thought - I know I am definitely going to make it again!  I'm thinking about doing a half and half on the next one.  Half with toppings I enjoy, and half with toppings my boyfriend enjoys.

Yesterday I ran two miles at the gym on the treadmill.  Finished in just about 24 minutes.  A little slower than I wanted but at least I got out there and ran.  Hoping I can get outside today and run before I head into work tonight at 5pm.  I need to start stretching my run length out and getting ready for the 10K race I am running on April 20th in Covington!  Last year my time was 1:18 which is quite slow for me; so this year my goal is to finish at 1:05.  My boyfriend wants me to try for 1 hour even, but we shall see!

Alright well I guess that's all for now!  Until next time happy healthy eating and happy running!
Posted by crunkyjens at 2:56 AM No comments:

Biscuits and Gravy or Sh*t on a Shingle!

I woke up this morning and hopped on the scale, down another 0.6 lbs!  I will take it!  Another 9.6 more to go until my mini goal I've got set for March 15th!  Hopefully I will be able to make it or at least get pretty darn close!

So on Sunday I had the inspiration to make my own version of Biscuits and Gravy for dinner on Monday (last night).  Biscuits and Gravy always reminds of my Dad's favorite dish while he was in the army, what the men so eloquently called "Sh*t on a Shingle."  LOL  So I winged up a recipe and gave it a whirl! 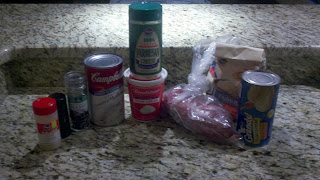 I also added a little skim milk but had forgotten to take that out of the fridge for my ingredients picture!  Preparation was pretty easy and didn't take too long.  Maybe a half hour from start to finish. 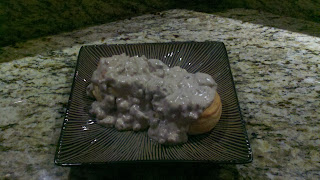 And viola!  The finished product!  I must say it turned out VERY good!  The boyfriend went back for seconds and said he was very impressed!


1 lb of ground beef (I used grass fed ground round)
1 16oz can of Cream of Mushroom Soup
1/2 cup sour cream (I had regular on hand, you could use light or fat free for fewer calories)
1/4 cup parmesan cheese
1/2 cup skim milk
1 tbsp flour
Salt and pepper to taste for the sauce
Garlic to taste in the ground beef while cooking
1 can of Pillsbury Grand Honey Butter biscuits (you could use any flavor, this was just what I had in the fridge)

The recipe wasn't the healthiest nor the lowest in carbs thanks to the biscuits but it hit the spot and was definitely a nice meal to have every once in a while!  Depending on how many biscuits you have for yourself this recipe could serve four to eight.  We have left overs so tonight I'm going to have some, but only have one biscuits to keep my carb count low for the day.

Well I hope everyone is having a lovely Tuesday!  I am off to get ready to work my part time job tonight as hostess at an Irish Pub here in Atlanta.  Hopefully the night will zoom by!  Until next time, happy healthy eating and happy running!
Posted by crunkyjens at 11:55 AM No comments:

One of my favorite times of the year is when the tulips start to bloom!  Reminds me of home and my mom and Grandma.  These are some that are planted outside the front of my condo complex here in Atlanta.  Gorgeous!  Spring is right around the corner! 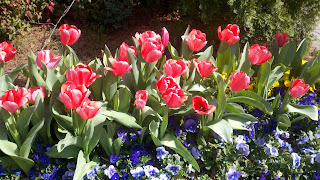 Posted by crunkyjens at 6:49 PM No comments:

crunkyjens
In short: My name is Jen, I am 29 years old, about to be the big 3-0 in May. Trying to blog to hold myself accountable and keep tabs on myself as I try to get healthier; one run, one muscle, one pound, one glass of water, one vegetable, one fruit, and one healthy snack at a time!